“Wasted space” —this is a term often used by those who don’t understand the value of white space. Inexperienced designers fear white space on sign work and attempt to fill it up with copy or graphics. Or, commonly, they open up line spacing so that copy covers the sign from top to bottom. I have even heard some say they are trying to give their client their money’s worth by not allowing any empty areas.

But white space, also known as negative space, is not synonymous with wasted space. The true meaning of wasted space is space that is poorly used. As Alex White said in his enlightening book, The Elements of Graphic Design, “The ultimate wasted space is overfilled space. It is space that has been crammed with content, artlessly and uninvitingly presented.”

A designer’s job is not to fill in all available space with information. It is to make information accessible, and more than that, to make it appealing. Think of negative space as something that illuminates positive space. It makes the positive elements, the lettering and graphics, readable, or to use a common web design term, white space makes these things “scannable.” Because of this, negative space is just as important as positive space in sign layout.

Think about this: What makes a single letter recognizable? It is not merely the positive strokes that make up the letter, but also the negative space within and around the letter. Both positive and negative space are necessary elements of design.The problem is that most of us learn from an early age to see only one part of design—the letter—the positive. Sign-buying clients have the same problem. And it is a problem that inexperienced designers need to consciously work on to overcome.

“Make the letters as big as possible,” sign buyers are often heard to say, “so the message will stand out.” The result is a busy, crowded-looking sign. Instead of “standing out,” the message is often lost in the edge-to-edge busy-ness. The design becomes visually noisy, a chore to read, easily ignored.

Adequate white space, on the other hand, enhances the readability of a sign. It makes the layout look accessible, manageable. It becomes comfortable to scan, easier to read, with thought groups easier to recognize. White space can even be used to add emphasis or drama, to make a design element stand out, punctuating it, making it clearer, more recognizable. This is why branding guidelines developed by large corporations carefully stipulate the minimum white space required to surround their company’s logo. A logo surrounded by space stands out better than a logo that fills up space. 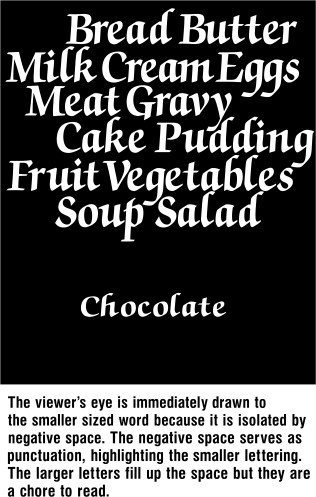 Open a typical Yellow Pages book and look at the ads. Are the pages easy to read? Hardly. Is there any empty space? No, none. Are the advertisers getting their money’s worth? The overall look of the ads is a cluttered, mind-numbing visual mush, like the layouts were created with a shotgun. Ads in the Yellow Pages are the ultimate “wasted space.” Yellow Pages advertising succeeds, not because of compelling design work, but because buyers are actively seeking sellers. These ads succeed in spite of their ugliness.

One of the first objectives of a beginning sign artist should be a study and working knowledge of negative space. White space is not wasted space. It is not to be feared. Learn to see it and how it is used in good design work. White space used well can help us transform our own work from mediocre to polished. More importantly, our sign work can be made truly effective rather than something to be ignored.