I was browsing a digitized version of a trade journal for printers and allied trades called The Inland and American Printer and Lithographer, published in Chicago over 120 years ago, and I ran across a striking forecast. It appeared in the August, 1895, issue and was part of a contributed piece by a Mr. R. Coupland Harding.

Here’s what he wrote: “William Morris has predicted that typography will cease to exist during the next century, and he may be right in his forecast. I see it threatened by the camera, the etching fluid, and by the (at present) harmless and inoffensive ‘typewriter,’ in the keyboard of which lies the germ of something much greater in the future.”

Coupland Harding, if he were alive today, would be amazed to see the changes that have occurred in the printing industry because of the ‘harmless and inoffensive’ keyboard since he wrote those words. William Morris (designer, typographer, poet, writer, printer, artist, who died the year after the above article was written) would probably share Harding’s amazement to see how events have unfolded in the following 100 years as exploding technology made its impact on printing, as well as graphic art and design. Already, in the closing years of that century, patent applications were flooding the US Patent Office with designs and inventions for mechanized typesetting. The successful surviving technologies, Monotype and Linotype, were already found in bigger print shops, putting out of work many compositors, hand typesetters and the like. These metal monsters, controlled by a keyboard, would quickly dominate the world of typesetting and then die a slow death, eclipsed for a short while by photo typesetting processes, and then be gone forever by the end of the B.C. Era (Before Computers). Of course, the keyboard never died. It just morphed with the industry.

A similar deathfate has been experienced by a trade related to printing. Sign painting— hand lettering—though still kept alive by a few, has all but disappeared, also as a result of the ‘harmless’ keyboard. The keyboard is immortal. It is a changling. It will never die.

Intrigued by his letter written to the Inland Printer, I found that Coupland Harding was an influential typographer and critic of his day. The son of a printer, he lived in New Zealand. Here is a link to some biographical information:

William Morris (1834–1896) was well known in the design world during his lifetime. He was known for his work in textiles, and he was a mover and shaker in the Arts & Crafts movement. A poet and novelist as well, he contributed to the fantasy genre in its infancy. The Victoria & Albert Museum in London has an extensive collection of his wallpaper and tile designs. 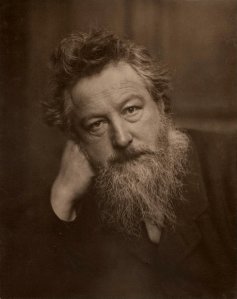